Kamala Harris and the Diversifying Image of Political Power 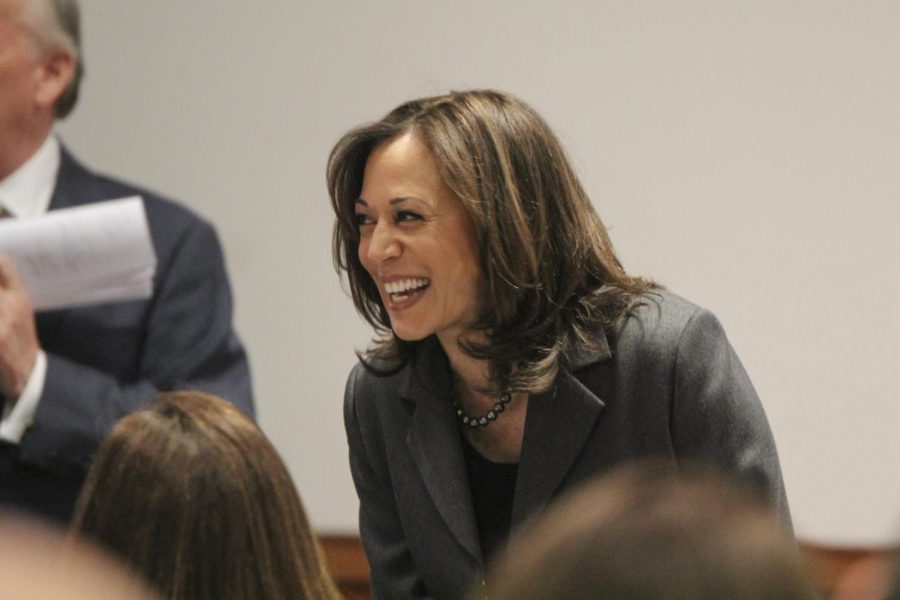 Kamala Harris greets the crowd at Politics and Eggs

The views expressed in this opinion piece are those of the author and do not necessarily reflect the views of Holderness School.  The Picador serves to stimulate discourse through the thoughtful and respectful exchange of ideas and recognizes that a range of perspectives must be considered in order to foster such discourse.

There’s a long list of requirements for any candidate for political office, and the list only grows when that candidate is a woman. Add pretty but not too pretty, strong but not overly masculine, and loud but not shrill to the seemingly never-ending list. As of 2019, power is still associated with tailored suits, with ties, with shiny dress shoes and short hair. Oh yeah, and being a man with white skin.

When I attended the St. Anselm College Politics and Eggs speaker series and saw Kamala Harris speak in person, something she said stuck with me. She said that her mother told her that she might be the first person that looks like her to do many things, but it’s her job to ensure that she isn’t the last. Kamala, a black woman, doesn’t fit the Washington-type mold, but in a special way. There’s not much argument over her qualification to be President, as she has served as the District Attorney of San Francisco, the Attorney General of California, and US senator from California. She manages to be educated, articulate, poised, folksy, funny, and hardworking. Furthermore, she even manages to pull off being pretty but not too pretty, being strong but not overly masculine, and being loud without being too shrill. On paper, Kamala Harris is a perfect candidate for a new, progressive Democratic Party, one that wants someone who can unite the left and represent the inclusivity that came about in the midterm elections. However, despite checking every box on the list, she is not getting the same coverage as Beto, Bernie, and even Biden.

Could her lack of support indicate a problematic intersection of being both black and a woman?

In an intersectional view of American culture, issues pertaining to race, gender, sexuality, class, age, and other bases of discriminations are related. It may be best described by Audre Lorde’s quote “I am not free while any woman is unfree, even when her shackles are very different from my own.” Though Lorde said woman, in this case, “person” is more accurate. Intersectionality acknowledges that since many people face oppression from multiple angles, the only way to combat a single problem like gender discrimination is to also push for racial equity so that women of color receive the same enfranchisement as their white counterparts. Kamala, as a woman of color, is a unique icon of intersectionality, unlike other candidates. Beto O’Rourke, Bernie Sanders, and Joe Biden are straight white men and are, therefore, members of the American privileged class and line up with every U.S. president in history, excluding Barack Obama. Others popular candidates — including Cory Booker, Pete Buttigieg, Kirsten Gillibrand, and Elizabeth Warren — hold characteristics that take them out of that category but still only face one form of oppression. However, Kamala, as both a woman and a person of color, faces the greatest systemic barriers to success in the United States.

So, I urge you, when looking at Kamala, don’t hold her to a higher standard than you would Beto, Biden, Bernie, or anyone else. Asking for greater achievement while giving lesser respect to women (especially women of color) is a centuries-old phenomenon, and the 2020 election is a perfect time to leave it in the past. Look at her policies for teacher’s pay increases, for combating gun violence and violence against women, for criminal justice reform. Watch her speeches, see if they make you feel something. Look up videos of her grilling Brett Kavanaugh and Bill Barr as a formidable member of the Senate Judiciary Committee. Read her book or articles she’s written and get a sense of her voice. Then make a decision based on the abundance of information available rather than letting systemic barriers and stereotypes convince you that a black woman shouldn’t be your president.